Me, rambling about motherhood and my ridiculous life…

I just got a chunk of waffle tossed into my hair.

Since this is not breakfast-time, I know you are surprised. I was.

It was unearthed in Chewies Dog-bed (which really is a cat-bed. Even though he’s a dog). Chewie has this tendency to bury things he won’t eat in his little bed.  I just found it a few minutes ago and thought it was funny. Ever since M became ‘Mr Mum’ I have found a lot of random bits of food all over the house.

Now part of it might be that we are doing a lot of ‘wheat-free’ cooking. Tapioca bread and wheat-free waffles. Tapioca bread does not toast well. If you make it golden brown, that actually means ‘brick’ in the language of toast.

And M is such a good Mr Mum. He toasts things to perfection, a lovely golden-brown. Which might make for deliciousness in our wheat-filled world. But actually means ‘cobble my sidewalk with your toast pieces’ in the land of the wheat-free.

I have accidentally stepped on it. I know. It is as hard as a m-f’er.

Apparently Chewie is not interested in our new wheat-free life-style. In the evenings, when I am home and M is off at his summer evening job of serving…. I find little morsels in corners of all the rooms. Waffles in the living-room. Biscuits in the bedroom. Toast everywhere. Chewie hates toast. Well, wheat-free toast anyways.

At least, this wheat -free toast. I think he would have liked what V was eating in Canada. We needed a dog in Canada to clean up the mess V made.

So, unbeknowest to V, wheat-free sucks. It sucks as even the dog won’t eat it.

And then, Chewie did something that surprised me. In retrospect though, it shouldn’t have.

He ate the waffle. So I guess, in hindsight, it wasn’t that bad. I just wish M hadn’t thrown it at me first…… 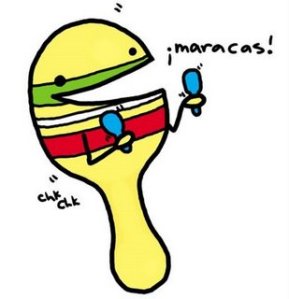 I have a split lip, courtesy of my son.

Let me backtrack a little….. V and Pop-Pop hung-out Friday(as a result of a day-care  scheduling issue). M worked the usual 2 jobs. I didn’t eat lunch (for the 3rd time this week), left early and relieved Pop-Pop from grandson-duty.

Off V and I went to pick up birthday party supplies…. Oh, I am getting soooooo excited about his birthday. I know all he is going to do is ignore everything, look overwhelmed, cry and smear cake all over everything. And maybe swim in the pool. Again, I am so excited.

So Friday evening was the usual…. usual dinner, usual bath, usual struggle to strap a diaper onto that little fat bum. Usual everything. During diaper-changing, I usually give him a toy to play with to distract him while I wipe the tush and slap that diaper on. Today his toy was a maraca.

Seriously, it really was.

The first sign was when he learned to how to shake it. So adorable really, a baby shaking a maraca. And the look on his face while he was doing it was priceless. Even though he has had the toy for ages, this was the first time he realized that he could make it make noise.

And make noise he did. And about 25 minutes later I started to regret giving it to him (mostly after I got hit in the head repeatedly by that darn thing)…. but when I tried to take it away, he cried (and so I gave it back).

During that whole “Can Mummy have the maraca??” I got headbutted in the mouth and split my lip. Holy Mother does V ever have a hard head. It didn’t seem to faze him at all though, and this morning (Saturday) when he woke up there were no signs on that huge head of his that he had ever slammed it into my teeth at all.

I think perhaps he is impervious to pain. Or he has a really thick skull…Or both.  I can’t believe that his head made me bleed and he didn’t even notice that the whole event occurred. Although considering how much he is like his father, I guess I shouldn’t be that surprised that he didn’t notice… I think sometimes that M wouldn’t notice if the house was on fire around him, especially if some sort of  cooking program is on while the house is burning down. He would definetly stay until that end of the show, while V, Chewie and I waited patiently on the front lawn.

Chip off the old block, eh?

Sadly enough I am starting another craft project.

Not that I have actually finished the blanket I was working on or anything…. I am just having problems with it. So instead of starting over with it, I am putting it aside for the time being and starting completely over with brand new yarn (but the exact same pattern).

I feel guilty about giving up, so I don’t….. I put it ‘on hold’ and move on to something else. I really do mean to come back to it (I love the colours in the last project).

Anyways, so I am trying a thinner yarn, a smaller crochet hook but am still using the same pattern which is called “Waves” and looks like it will be quite pretty when it’s done.

I really will finish this one…… for real.

Anyways, so that was one of our errands today, running to Michael’s and picking out some new yarn with V. My colour choice was partially decided by the ball of wool V grabbed and stuffed in his mouth.

Anyways, after all of this craftiness we swung by Gramma and Pop-pop’s for a little visit.

V loves playing at their house, probably because it’s so much bigger than our apartment, and more people pay attention to him.

He was playing away on the floor and somehow slipped and fell, banging his face on the hard tile floor.

Instant screams and sad little boy face. Tears streaming. Gramma reached him first, grabbed him and instantly soothed him (he loves his Gramma) with this lovely Italianism “Do you want a cookie??”. It worked, he got a treat and everything was fine…. He is soooo his daddy’s boy!

He was munching away on his little treat, when I noticed that it had turned pink… which was odd, since there was no reason it should have. And that’s when I realized that it was blood.

He must have hit his nose when he fell, and with a closer look I realized that there was a smudged trickle of blood on his upper lip. Poor boo, his first accident.

M arrived soon after, I told him about the whole thing and his response was “Really??? Awesome!! His first accident!! Did you take a picture of the blood??”